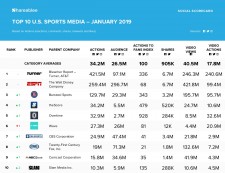 ·      The fastest-growing number of engagements for a U.S. sports TV network in January was Sports Media: Oath Inc. (ranked twentieth), with 88.1 percent growth in overall engagement since last month

·      In terms of branded content, The Players’ Tribune had the highest engagement on their branded content with over 31,000 actions, partnering with MassMutual. The content featured a three-minute video depicting the touching story of Anthony Hitchens, football linebacker for the Kansas City Chiefs, as he reflected on the impact his adoptive family has had on his growth, both personally and on the field. It was the second-most viewed branded content video at 1.07 million views in January

·      The most viewed branded content video was from X Games, with over 1.23 million views, partnering with Harley Davidson. The one-hour video consisted of a motorcycle snow hill climb race from the X Games in Aspen, Colorado