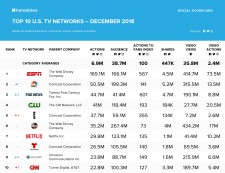 NEW YORK, January 9, 2019 (Newswire.com) - Shareablee Inc., the global leader in audience-based social media measurement, today released their ranking of the most socially engaged American TV networks for December 2018. The ranking includes all television shows and all main network brand accounts under their respective networks, which were down 16.3 percent in overall engagement and reflected a total of 681 million actions (post-level reactions, shares, comments, retweets, and likes) across Facebook, Twitter, and Instagram in over the last month.