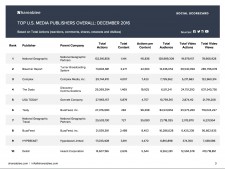 National Geographic continued its dominance of the rankings taking the number one position with 132.5 million actions. Bleacher Report also maintained its second position, garnering 73 million actions. Both publication grew their total engagement by 5% since November, just above average for the entire top 10 list.  Of the top 10, Complex saw the highest growth in engagement, at 20.4 percent.

National Geographic's performance was driven by a combination of links, images and video. Its top post was a link to a tail of a 99-million year old dinosaur and it top image was a collection of the 52 best images from 2016. Both posts captured over 300,000 actions.

Other notable findings include:

Shareablee is the first and only industry-level measurement solution for media companies and brands wanting to understand the impact and effectiveness of their cross-platform social media campaigns. The platform is now available globally, with clients in 15 countries worldwide.

Shareablee captures real-time interactions of more than +850M consumers against its global dictionary of brands, publishers, TV shows, influencers, celebrities and more. The company marked its third anniversary in February with 300% revenue growth in 2015 and closing with +250 clients in 2016. Shareablee's roster of platform clients consists of many industry leading media companies and brands, including the NBA, WWE Warner Bros, P&G, Hulu, NBC, AOL and Luxottica. The platform also includes subscribers from leading advertising agencies represented by Publicis, WPP, Maxus and Interpublic Group.