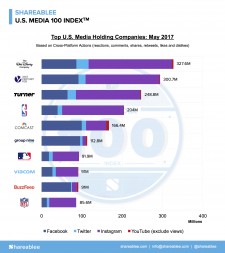 Haymarket Media saw the fastest growth in May, with a 143% increase in total interactions driven mostly by their increase in video content. First Media followed with 76% growth in total actions and 100% in shares, climbing the list to #25.

Other Notable Findings Include:

To view U.S. Media 100 IndexTM Ranking for the month of May, please visit:  https://www.shareablee.com/rankings/

Shareablee is the leader in audience-based social media measurement for media publishers, agencies and brands that want to understand the impact and effectiveness of their cross-platform social media campaigns. Shareablee captures the real-time social media actions of more than 2 billion consumers and parses them across 700+ metrics into its global taxonomy of over 475,000 brands, publishers, TV shows, influencers, and celebrities going back to January 2013. Shareablee was founded in 2013 by Tania Yuki. Based in New York City, the company has grown to over 60 employees in U.S. and EMEA offices and has clients in 15 countries. The company partners with Facebook, comScore, and Bloomberg. Shareablee is a Facebook Media Solutions partner and one of only 15 companies globally developing on the Facebook Audience Insights API. Shareablee’s roster of platform clients includes the National Basketball Association, WWE, Warner Bros, ESPN, Hearst, NBC, AOL, Coach, Comcast and leading global advertising agencies Publicis, WPP, Maxus, and Omnicom.